Why I Created The AdaptaStep® Recovery Shoe 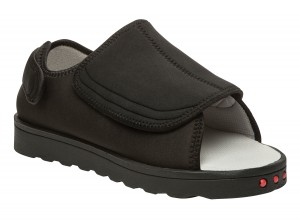 Post-op or trauma shoes have played a significant role in the recovery of a patient from injury, surgical or external trauma. These shoes have undergone changes in appearance, materials, shape and anchoring—indicating the need to adapt to various self-induced problems from the shoe itself. The recovery of a patient involves many components, including the transition from protective gear to return to normal footwear.

One of the most recalcitrant of symptoms secondary to the protective shoe is edema. Edema is the result of the trauma sustained and the inability to milk the extremity with normal muscle activity, thus diminishing the venous/lymphatic pump to return to normal hemostasis.

The anatomy of the shoe contributes to this common complication. A rigid outsole prevents normal gait without push off and the patient often abducts the foot to ambulate in a forward progression. The transition from heel strike to mid-stance and ultimate propulsion is prevented and a constant platform occurs, interfering with muscle activity. Intrinsic as well as extrinsic muscles are ultimately affected.

Strap Trap & The Problems It Creates

‘Strap trap’ is another phenomenon contributing to edema primarily as a result of the anchoring straps with hook-and-loop fasteners. The straps, necessary to hold the shoe in place, create a constrictive pressure causing distal edema as well as intermediary edema between the straps. Patients removing and re-applying the shoe will have no appreciation of this and will pull the straps tight without recognizing the consequence. To avoid this phenomenon, compression should be provided—without constriction.

Depending on the surgery or trauma, the surgeon will determine the appropriate amount of weight-bearing for the patient, and in certain instances, such as implant for Hallux Rigidus, flexibility and motion of the forefoot and great toe joint may want to be initiated within the first couple of weeks to avoid joint stiffness and edema. This is not possible to fully accomplish without a transitional shoe.

As flexibility of the shoe increases, the post trauma edema secondary to immobilization decreases. Physical therapy and compression stockings are used post-trauma to reduce edema, increase range of motion and increase strength of intrinsic and extrinsic musculature. Physical therapy is needed at least 3 times per week for at least 4 weeks and often beyond. This time frame of 3 times per week for approximately 1 hour leaves an incredible amount of hours in the week that no treatment is provided. This is both time-consuming and expensive and could be reduced if instead of contributing to the problem, we could reduce the need dramatically with appropriate transitional post-trauma shoes.

The Importance Of Arch Support

Protective footwear should also be used to provide arch support for comfort as well as applying gentle massaging of the arch to help milk out plantar sludging. As the shoe transitions from rigid to flexible a more controlled gait pattern will be re-established, helping to control hyper pronation. This support will act as a temporary orthotic, further assisting the foot to return to normal function. This arch support can also be used to reduce spot pressure associated with diabetic ulcers or pre ulcerative forces, and protective weight-altering pads may be utilized.

The Creation Of A New Recovery Shoe

As a practicing foot and ankle surgeon for over 43 years, I have always emphasized the role of biomechanics and surgery to obtain optimal results. The role of the foot as it relates to the lower extremities is critically important and gait is an integral part of normal locomotion.

Recognizing these important concepts, I realized a change was necessary. The concept of a new recovery shoe became crystal clear to me and I identified key elements to an advanced design. AdaptaStep® was created to accomplish the desired and identifiable goals, as outlined above.

Since introducing this shoe, patient and physician satisfaction has been extremely remarkable. The comfort of the shoe is instantly appreciated compared to standard post-operative alternatives and the reduction of edema is rapidly appreciated.

A decrease in the need for extensive physical therapy has been markedly diminished, saving the patient both time and money. In addition, patients have returned to normal footwear far more rapidly and are most appreciative of this ability.